“Founded in 1980, Schug Carneros Estate Winery is the showcase and life-long dream of one of California’s most celebrated winemakers. Walter Schug’s reputation blossomed during his tenure as Founding Winemaker for Joseph Phelps Vineyards in the 1970s, where he made California’s first proprietary Bordeaux-Style blend (Insignia) and legendary vineyard designated Cabernets (Backus and Eisele Vineyards).”  Walter made his name in Napa, but made his home in the cool, marine climate of the Carneros Appellation.

Walter passed on in 2015, but the family tradition continues as Walter’s grandchildren now pick up the family business and embrace the tradition of excellence. 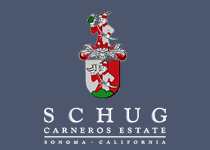